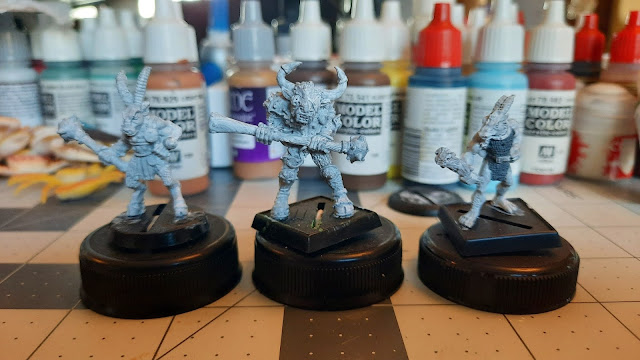 With my Slaanesh warband project progressing nicely and loads of time on my hands, you'd think I'd be churning out painted minis. Nope. We all have our slumps, and I'm no exception. Then Dave over at Wargame Sculptors decided to announce a Lockdown Challenge: paint a unit of troops, in any genre, and it gave me the kick in the backside I needed to hit the paints again.
In case you're wondering the origins of the Lockdown Challenge, Britain is again under lockdown because of Covid-19 thanks to the current shower of shit that's running the UK being incapable of dealing with a problem that they can't ignore, lie their way out of or bribe to go away. With people shut in their homes again, Dave came up with the challenge as a way of giving us hobbyists a way of staying sane. Even though I'm no longer in the UK I joined in.
Back to painting...
Citadel did a whole range of Slaangor, some of which boasted the usual Slaanesh signs such as crab claws, Fiend heads, long tongues and so on: 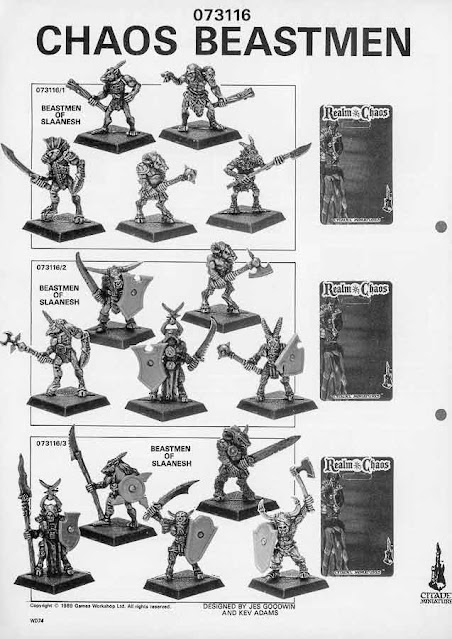 Also note that despite Slaanesh units being six strong, Citadel sold them in packs of five.
As time went on the beastmen (for all powers) became more generic. The ones in the top photo are all Citadel minis, but only the middle one is a Slaangor*; the others are later, basic ones.  As it turns out, that centre figure is actually a Champion, but as I didn't know this when I bought him on Ebay I'll just use him as the beastman unit leader. As you can see, I've started painting the chainmail of the one on the right with a coat of Neutral Grey.
I actually started painting the unit yesterday but soon hit a snag: 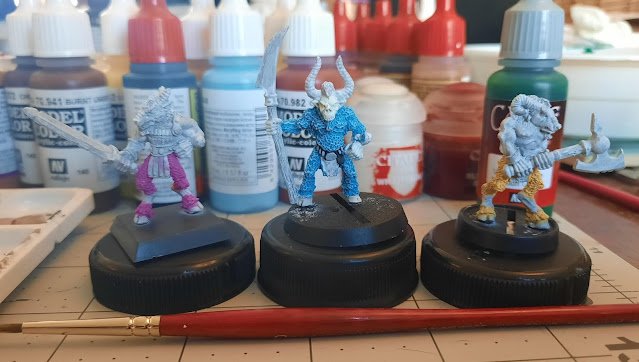 I've painted the Care Bears. Once again I didn't bother to look up what the colours should be, and just followed the usual path when painting my warband: slap on the pink, electric blue, yellow, and so on. I even got as far as shading and highlighting the central model before I started thinking, "These guys look like cuddly toys. This can't be right, can it?"
No, it certainly isn't. According to the utterly classic rule/sourcebook Realm of Chaos: The Lost And The Damned, Slaangor have "white or near-white fur and pale or pastel skins". Shit, I've painted them the wrong way around. And I don't own any Simple Green. Guess I'll be going to Home Depot today.
But I can crack on with the other three, and I'll be getting those done as soon as I can.
*To explain: Slaanesh beastmen are called Slaangor, Khnorne's are Khorngor, Tzeench's are Tzaangor and Nurgle's are Pestigor, as even Games Workshop blanched at calling them Nurggor. The "gor" bit denotes a beastman with horns, according to The Lost And The Damned.
Labels: chaos, citadel, fantasy, games workshop, oldhammer, slaanesh, warband