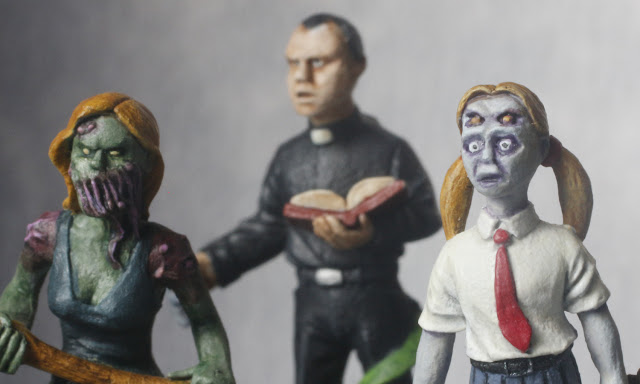 Harwood Hobbies makes four Changed figures, so today's mystery is "why did I only buy three of them?" Answers on a postcard, please.

It looks like there were supposed to be three sets of each figure in different stages of mutation: The Changed, The Twisted and The Transformed. The Kickstarter didn't hit its target so I assume only The Changed got made, which is a shame as the others are also great minis.

None of them have names and are just called "The Woman," "The Priest" and "The Schoolgirl," which sounds like the intro to a dodgy joke. I named them Lucy, Father O'Flanagan and Sarah. 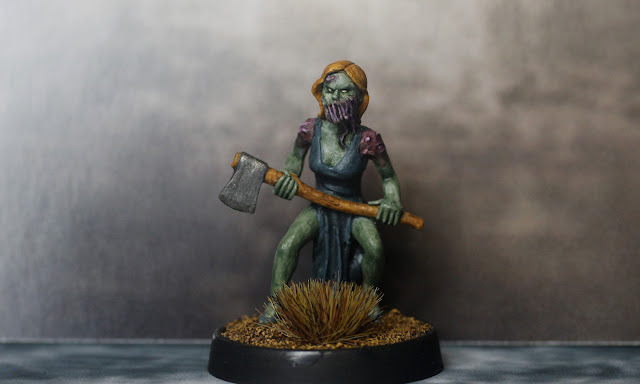 Lucy was the first to be painted, back in that ancient pre-plague era known as "June 2019" (Father O'Flanagan and Lucy spent 13 months in the Magical Box of Unloved Lead waiting to be done). I tried for a different look to her skin by basing it with Army Painter Ash Grey and then adding layers of Green Tone wash to build up the colour. Once I'd got that to a stage I liked, I used Purple Tone for the infected areas and added highlights with Vallejo Brown Rose and Pink. I had fun painting her axe. Harwood Hobbies seems to be a big fan of axes.

Her dress and shoes are Dark Sea Blue. I did her eyes with Moonstone to give her more of an alien look. Lucy is easily the most horrifying of The Changed, and the sculpt of her mouth is both brilliant and revolting. 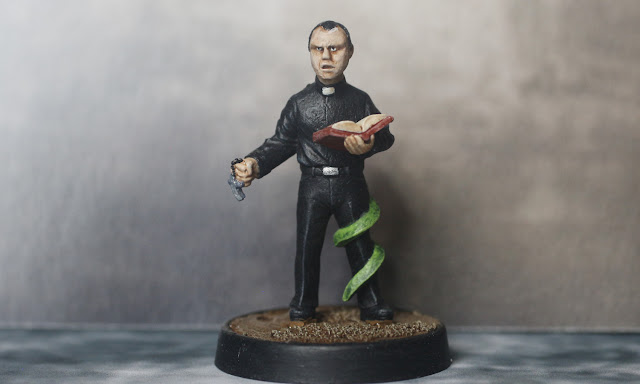 Father O'Flanagan was pretty easy: Vallejo Black all over because, according to the official literature, only priests wear actual black:


Once he was basecoated, the black was highlighted with a light drybrush of Sombre Grey. The only part that worried me was his skin. O'Flanagan is the first human I've painted in a while, so having to paint regular flesh tones again was a tad daunting. I used Vallejo Basic Skin Tone shaded with Army Painter Flesh Tone, and highlighted with the basic tone. It actually came out looking OK, much to my surprise, as did his eyes.

The bible should probably have a black cover, but I used Cavalry Brown just to add a touch of colour. I did think about adding some thin squiggly lines to simulate words on the pages, but painting purity seals has taught me that it doesn't look that good, so I left them blank. The pages are Ivory washed with Flesh Tone. 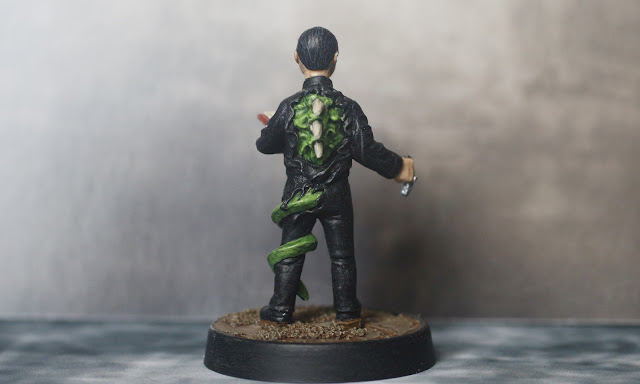 O'Flanagan's tail and back are Scorpy Green shaded with Green Tone and highlighted by adding Green Yellow. The spines are Bonewhite with Sepia Wash and Ivory. It's such a great little mini and I'm really happy at how it came out. 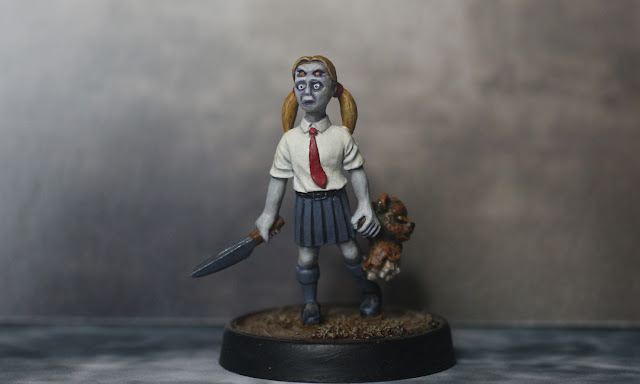 At first I couldn't work out what Sarah's mutation was when I saw her on the Harwood Hobbies site. Then I took a closer look at her face. Ooo, nasty. I like her pose; her just kind of standing there holding a knife and a mangled teddy bear is somehow more scary than if she was coming at you.

Sarah is the second schoolgirl I've painted. I didn't want to repeat the all-grey look, so I chose Ivory highlighted with White for her shirt and Flat Red for her tie. Some Sombre Grey for her skirt and socks and she was basically done. But then it was time to do her skin.

I didn't want to do a regular flesh tone so I plumped for Ash Grey and gave it a coat of Purple Tone. OK, so now it's a mess. I added layers of Silver and Ghost greys for the highlights and it ended up looking a lot better. I gave her human eyes a horrified wide-eyed stare and her mutant eyes are Lemon Yellow with a couple of dabs of Red Tone.

The teddy bear is Chocolate Brown highlighted with Orange Brown, and to be honest I'm not sure it worked too well. I should have just added white to the chocolate, but I guess I could repaint it at some point. 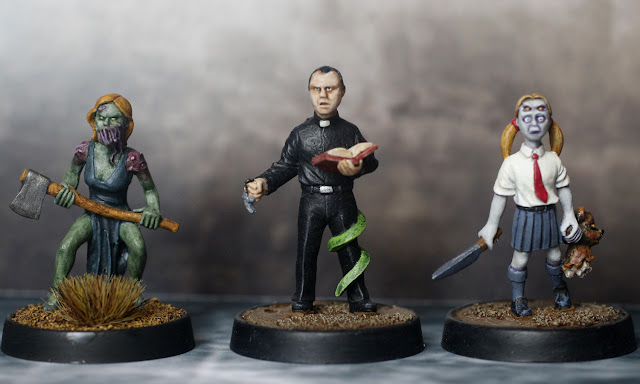 All of them are based using modelling paste with some sand glued on, painted Flat Earth and highlighted with Khaki. I would add a tuft to Sarah and Father O'Flanagan's bases if only I could find them.

I'll have to buy the final Changed mini — the mechanic — at some point to complete the group.
Labels: creepy, female, harwood hobbies, horror, monster, vallejo