Season of Scenery: The Waymarkers 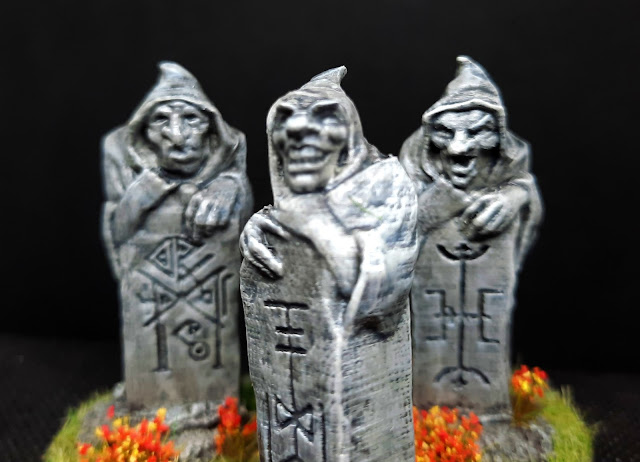 Another day, another set of minis bought from Etsy. These three chaps were pretty cheap — $10 including shipping — and despite being on a bit of a sci-fi kick at the moment I wanted to paint them as I think they're pretty cool.

They're available in a variety of scales, so I got them in 54mm so they'd be bigger than 28mm figures. 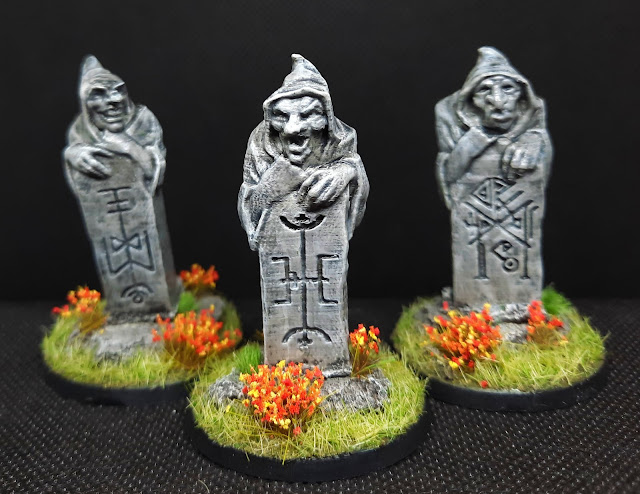 I started off by snipping away the small integral bases they sit on, which are moulded to look like rock but didn't do it for me. Then I tore up some cork tile and glued the pieces to 40mm bases, and once dry I superglued the statues on. I took them down to the garage to be sprayed with black primer. I painted these in a different way to how stone is usually done, starting with a basecoat of Burnt Umber and a wash with Agrax Earthshade. I think I wanted to get away from the usual grey-over-black look that models painted to look like stone have.

Thanks to the humidity here in Vermont the wash dried very glossy, so they all got a coat of matte varnish. 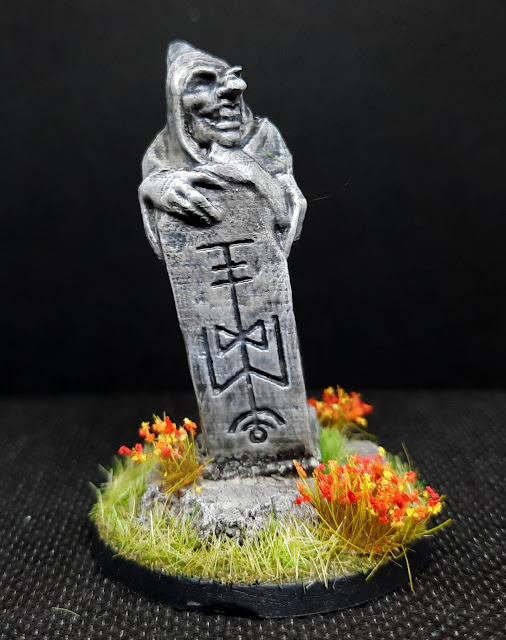 Next up was a heavy drybrush/overbrush with Stone Grey, which covered the statues and the cork, then a lighter once-over with a mix of Stone and Ghost Greys. I let that dry and gave them all a wash with Nuln Oil, which thankfully didn't dry with a shiny sheen.

The final step in painting these was to give them a very light drybrush with a mix of Bonewhite and Ivory, using a makeup brush. A final coat of matte varnish and they were done! Basing time! The bases were covered with modelling paste to give them a bit of texture. Once it dried they were painted with English Ivy craft paint and then covered with Mod Podge and the same flock mix I used on my temple. As usual the flock was set with thinned matte varnish, and then they got a second coat of flock to build it up a bit.

I painted the bases with Mod Podge and sprinkled 4mm static grass over it. Instead of using the applicator I just turned them upside down and tapped the underside of the base to make the grass stand up, and it worked pretty well.

Once all that was done, I just added some flower tufts to the bases and a few smaller tufts to the rocks. I like the juxtaposition of the cheery flowers with the creepy statues.

They're pretty basic models but look good once painted, and they didn't take long to do; ignoring the time spent waiting for PVA to dry these three probably took about 90 minutes to knock out.

There is more sci-fi scenery to come, honest! I've been having issues with the piece I'm trying to make as it involves angles, which involves maths, so I'm totally out of my depth.