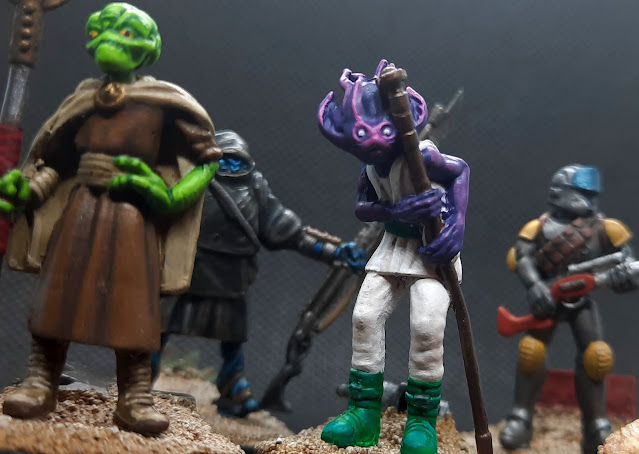 I saw these minis on Kickstarter a while back, but as the campaign was ending I didn't bother picking any up. I did join the Star Schlock mailing list, and a couple of weeks ago I received an email telling me the minis were available to buy on the site. I headed over there, and needless to say my ATM card took quite a kicking. 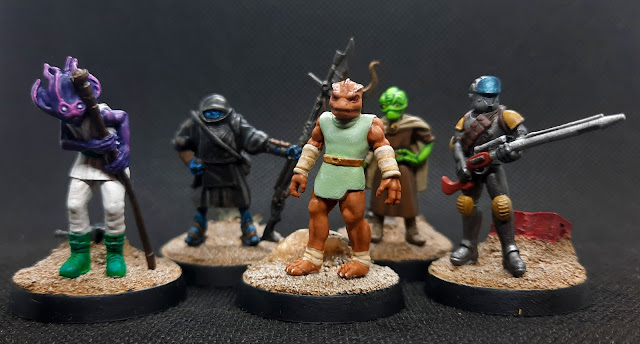 Star Schlock is a sci-fi game that has its own minis, but you can use any figures you want from any manufacturer. According to the website, it's supposed to be flexible, made for simple, speedy games, and you can use a range of scales from 15mm to 54mm. I would have bought the rule book but it's sold out.

Star Schlock has a very 1970s/80s vibe and styling, with obvious influences from Star Trek, Star Wars, Buck Rogers and other sci-fi shows. As I grew up with those and others, I love this look and dived in.

I was more interested in the individual sculpts rather than buying packs of five or six near-identical minis of different races, so the three bystanders and three star raiders were the obvious choice. There's only five minis in the above photo because one bystander is not quite finished and I wanted to get this post up to keep my fan(s) happy.

Also, having just painted a ton of minis (well, ten) in red and black, I banned both those colours from these figures and it really helped in my colour choices. 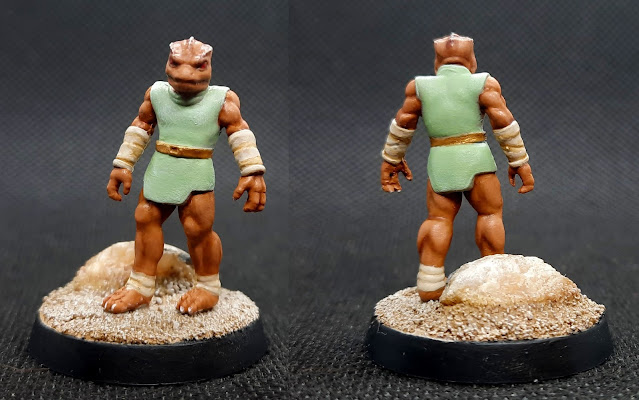 On the site, this chap is described as Gary the Gorp. He's pretty obviously based on the Gorn from the classic Star Trek episode "Arena", where Kirk fights to the death against a bloke in a rubber suit in the alien environs of Vasquez Rocks (sorry, Keith, I do actually like this episode!)

Instead of going for green skin, which I knew I was going to use on one of the other aliens, I decided on brown, using Orange Brown, Seraphim Sepia and Light Brown. His rather short tunic is Scaly Hide, which I hope gives him a bit of an old-school look, and his belt is Brass and Gold.

I'm not sure why he's wearing leg warmers and sweatbands on his arms, but they're Ivory with Seraphim Sepia. A touch of Bonewhite on his head spikes and claws and some Mephiston Red for his eyes and he was done. 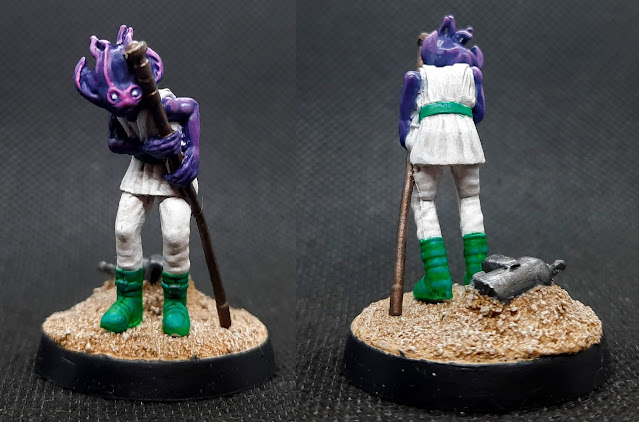 This is an alien race known to humans as Beefheads, and I think they're supposed to be a take on Tusken Raiders. There's no mention of them in the Universe section of the Star Schlock site, which is a bit odd, but I do like their look.

I kicked off with his skin, painting it Royal Purple and highlighting it with Hexed Lichen and Purple. I thought it needed another colour, so I added Pink to up the alien aspect.

To give a strong contrast to his skin, I figured white would be ideal for his clothes, so I hit them with Off-White, Grey Wash and then pure White. His chunky boots are Park Green Flat, and I did his belt the same colour just to not waste paint. The staff he's holding is Tinny Tin, and a couple of dots of White worked for his eyes. 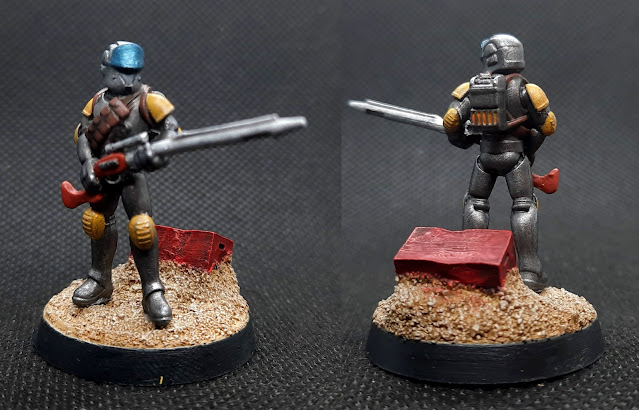 Man Hunter bears a certain resemblance to a TV show character whose name sounds a lot like The Mandalorian, so a Mando-like scheme was the only way to go. He was by far the easiest mini to paint.

After a basecoat of Iron Warriors, he was washed with Nuln Oil and highlighted with more Iron Warriors and some Silver. His visor is Gunmetal Blue, a metallic I've barely used, and his knee, elbow and shoulder pads are Averland Sunset.

The Deadpool-esque pouches are Burnt Umber and Mahogany Brown, and his rifle has a Silver barrel and Cavalry Brown stock. 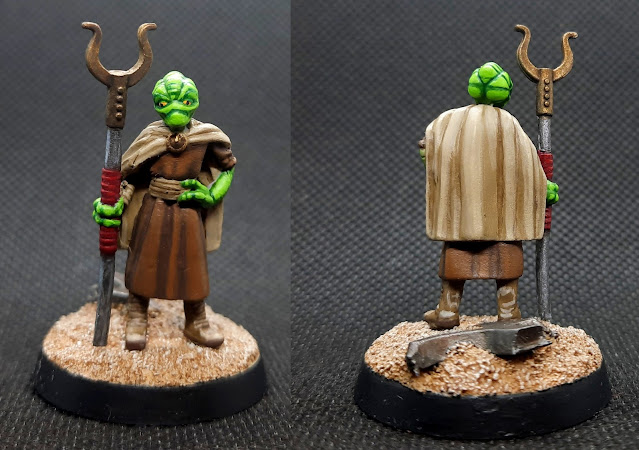 This reptilian chap is a Sleazoid, who, according to the site, "haunt interstellar trade routes and the dark alleys of frontier outposts". He's an Overseer but you can also get a squad of five Sleazoid Marauders.

I debated doing his skin blue just to be different, but tradition won out. After a basecoat of Park Green Flat, I washed it with Biel-Tan before painting in the raised areas with a couple of thin coats of Scorpy Green. After a bit of tidying up it looks really good.

I unintentionally gave him Jedi robes, using Chocolate Brown, Flat Earth and Khaki, with some Agrax Earthshade. His staff is Plate Metal with a Bronze top and I decided on Khorne Red for the wrapping just to add a touch of colour OH SHIT! 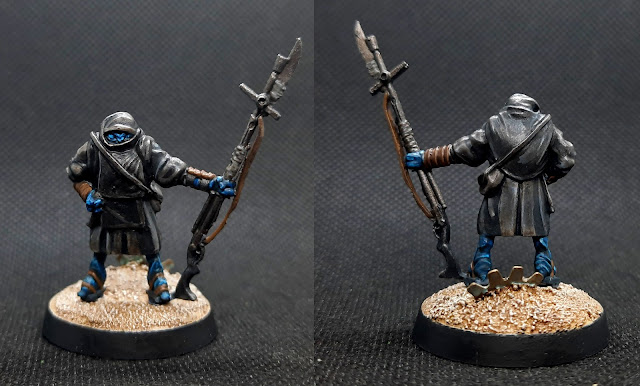 Finally we have Nilo, another Star Raider. For the record his robes are Black Grey, so almost I managed to stick to my rule to the bitter end. Yay!

Anyway, once the Black Grey was on I highlighted him with Neutral and Ghost greys and then thought they were a bit too bright, so I plastered him with Agrax Earthshade to tone everything down and give him a dirty look.

His skin is Dark Sea Blue and Electric Blue, and his shoes, which seem to be inspired by Japanese sandals, are Iron Warriors. I kept the worn look when painting his rifle, using Iron Warriors washed with more Agrax Earthshade.

As well as the final bystander, I have more Star Schlock minis to come soon!

Forgotten Heroes: I give up

I'm a bit embarrassed to say that I won't be submitting anything for this year's Forgotten Heroes challenge. The idea I had was great and would have looked very cool if I'd managed to work out how to do it, but I simply couldn't suss it out. After three attempts, the frustration and annoyance have become too much, and it's not helped that recently I've been waking up stupidly early — today I was awake at 2.50am, usually it's around 3.30 or 4 — and being tired really didn't help me when it came to attempting my idea.

I had a Plan B, but the mini I'd need has vanished into the ether. I mean it's around, I just can't find it despite it still being in its packaging.  Classic.