These lovely ladies have spent the best part of two years in a cardboard box, so it's about time they were brought into the light and painted up.

They came with my Amazon War Party that I picked up via Kickstarter back in November 2020. Despite not being hugely interested in Amazons, I thought the sculpts were so cool looking that I had to dive in, and for $30 they were mine. There are 10 in all, the four "characters" I've painted as well as two with spears, two with swords and two with bows. Those six are around 80% painted and I'm hoping to finish them off within a week or so. 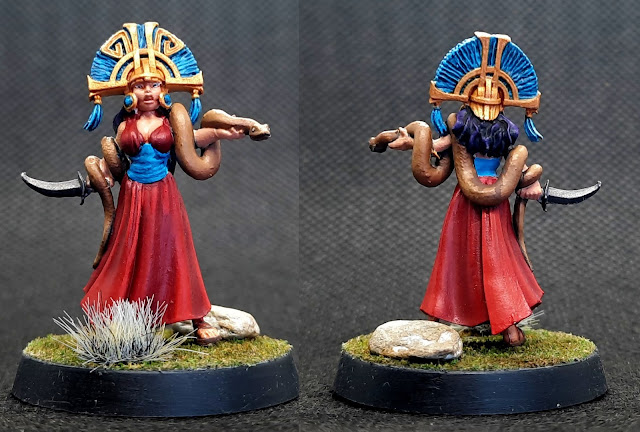 The Snake Priestess was the obvious starting point as she looked like the biggest pain to paint and I was not wrong. I did her robes first, using my usual red scheme: Khorne Red, Mephiston Red, Flat Red and Vermilion, the latter three applied in layers. I thinned some Black Red to deepen the shadows a bit more.
Her magnificent headdress is Brass and Andrea Blue, with Gold highlights. I tried drybrushing the blue bits with Deep Sky Blue but ended up just getting it on the gold, so I just washed them with Drakenhof Nightshade and hoped for the best. After painting her skin with my own mix of Heavy Skintone and Basic Skintone, I shaded it with Reikland Fleshshade, and then started on the snake.
I did try to do some kind of pattern on the snake, honest, but it was just beyond me, so I went for a very basic scheme of Flat Earth over Chocolate Brown, with some Yellow Ochre layered on top. It's not the most inspiring snake but it works.
After highlighting her skin with more flesh mix, I painted her earrings, knife and sandals and then finished off with her hair, which is Black with Hexed Lichen highlights. The sash around her waist was originally Ivory but I changed my mind while painting it and redid it to match the headdress. 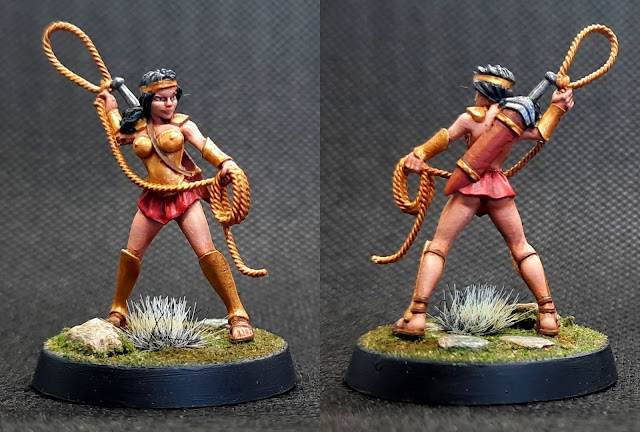 Despite drooling over Gal Gadot watching Wonder Woman and Wonder Woman 1984 about three times each, it wasn't until I was halfway through painting the Amazon Bounty Hunter that I realised who she's based on.

I kicked off by painting all her armour, headband and the rope Filthy Brown and then did her skirt the same way as the Priestesses' robes. The brown was given a once-over with Brass and then washed with Seraphim Sepia to tone down the brightness a bit, and then highlighted with Polished Gold.

Her sheath is Mahogany Brown and Cavalry Brown and the sword hilt Iron Warriors (as you can probably tell, this colour has shot to the top of my "fave metallics" list). Her hair is Black with Deep Sea Blue highlights. 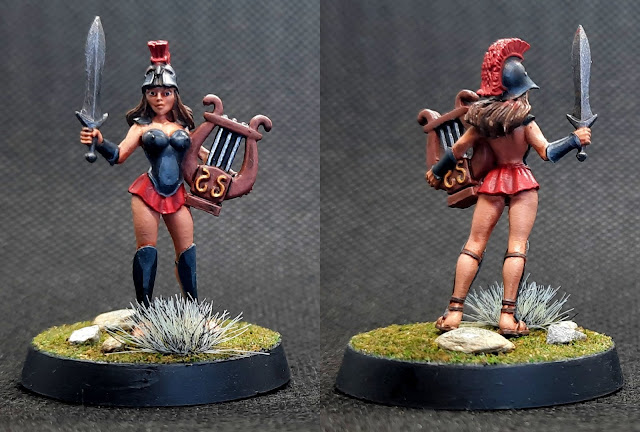 The musician was the first of the "basic" troops I painted, and I went with Black for her armour as it seemed the easiest way to go. I highlighted it with Black Grey and Neutral Grey, and I think it needs a wash with thinned Nuln Oil to tone the greys down a tad.

The helmet plume is painted to match her skirt, and her sword is Iron Warriors and Nuln Oil. 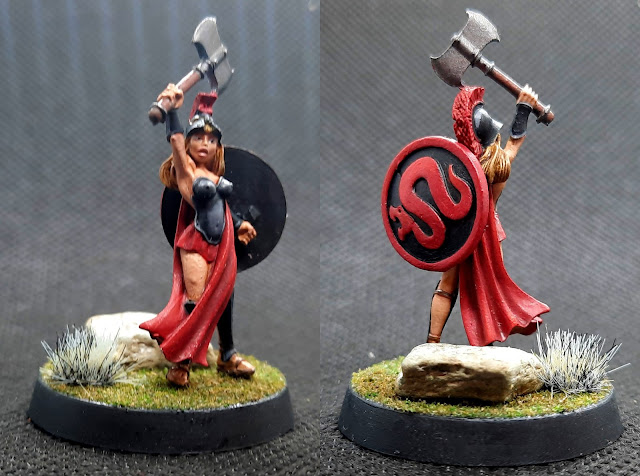 The bodyguard is a great sculpt with a real "come and have a go if you think you're hard enough" look. She's painted the same way as the musician, except her hair is Golden Brown with Moon Stone highlights.
I had a panic attack when I thought I'd lost the shields that come with the minis, but happily I found them without the need for screaming. I kept the black-and-red scheme going and I think it works really well, although now I wonder if I should repaint the Priestesses' snake red.

The other six Amazons should be up soonish, but in the meantime I have to get a move on with my Forgotten Heroes entry. It's coming along... slowly.