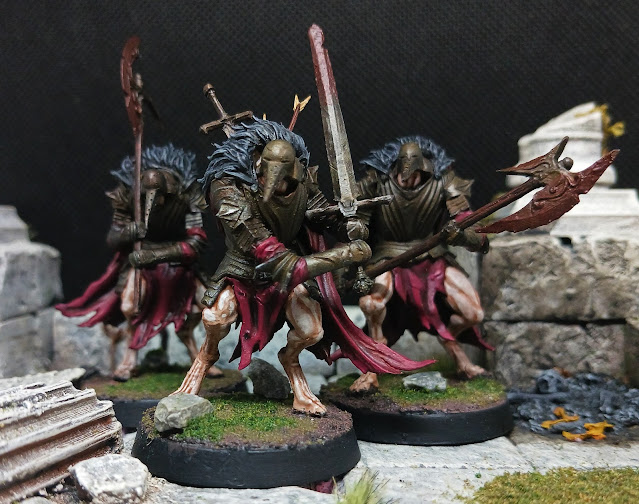 When I spotted these horrible chaps on Etsy, the first thing that went through my mind was, "This is what Chaos should look like". Evil, repulsive and violent, not just some blokes in armour with horned helmets.

The Calden Keep range has so many amazing figures that it took me about half an hour to decide which ones to get first. I went for the Lordsguard simply because they are awesome and the pointed helms have a definite Beakie look to them. They were easy to paint, and I just ripped off the colour scheme of red, plate metal and black from the models on Bestiarum's site, although I never know if those images are actual painted figures or coloured 3D renders.

The minis are cast in black resin, which is a bit of a bugger as it's difficult to see the details. I primed them with Chocolate Brown, don't ask me why, but it worked. I kicked off by painting all their armour  and weapons Iron Warriors and shading/dirtying it with Nuln Oil, Agrax Earthshade and some homemade orange wash. I gave the metal a very light drybrush with more Iron Warriors to bring out the edges but not make them too shiny. I want to keep these guys dark and horrible. 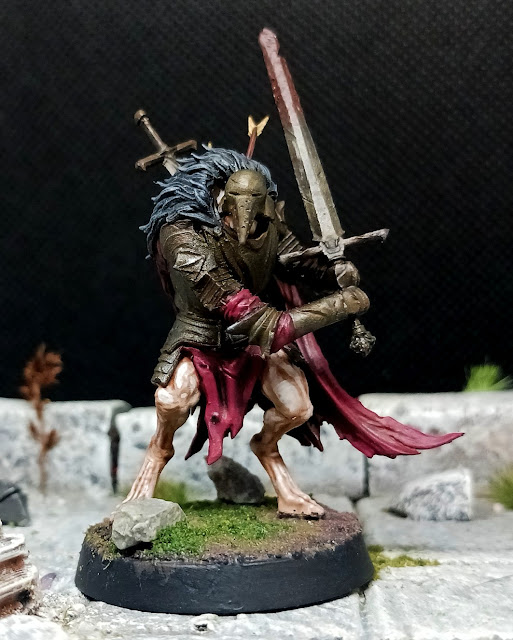 This one is my fave as his pose is just so cool. And he has two arrows and a sword sticking out of his back, but he's still fighting!

The next step was to paint the... fur? feathers? behind their heads. This bit was easy enough: I just painted them Black and then drybrushed Dark Grey, Black Grey and a bit of Neutral Grey on to bring them out. Their cloaks were basecoated with Black Red, and then highlighted with layers of Burnt Red, Black Red, Dark Red and Red. 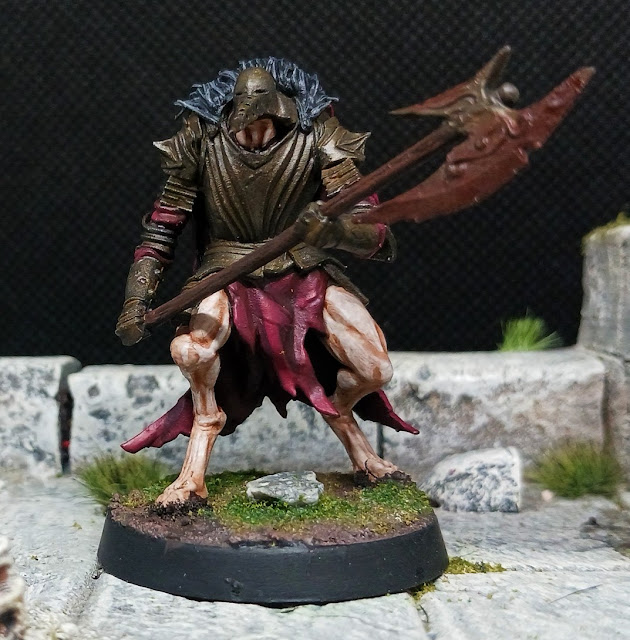 I wanted a very light flesh tone for their exposed skin, and Pale Flesh did the job. I shaded it with a lot of Reikland Fleshshade and then highlighted it with more Pale Flesh and some Pallid Wych Flesh to bring out the highlights. 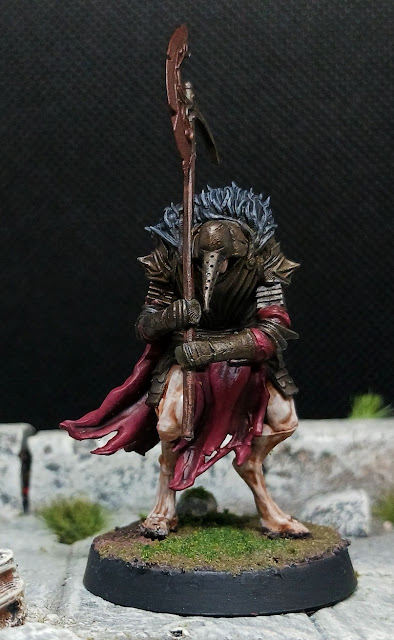 The final touch was to add some gore using some Vallejo Dried Blood and Citadel Blood for the Blood God on their weapons.

They come with printed bases that have all sorts of bones and skulls on them, but I did my own. I used 32mm bases, covered them with Black Lava paste and painted it Chocolate Brown, and then used PVA to stick some flock mix to it. Once I'd sealed the flock with Mod Podge I sprinkled on some green flock, and then added a few small stones from the drive, which really should have been put on before the lava paste. Oh well, that's a lesson learned for the next Calden Keep models.

Yes, I've ordered more as I think this range is so good, and also because the Etsy store I used offered free shipping on a lot of models. This trio of Lordsguard cost $10, including sales tax, which is incredibly cheap for such detailed and unique minis. So there's more to come!