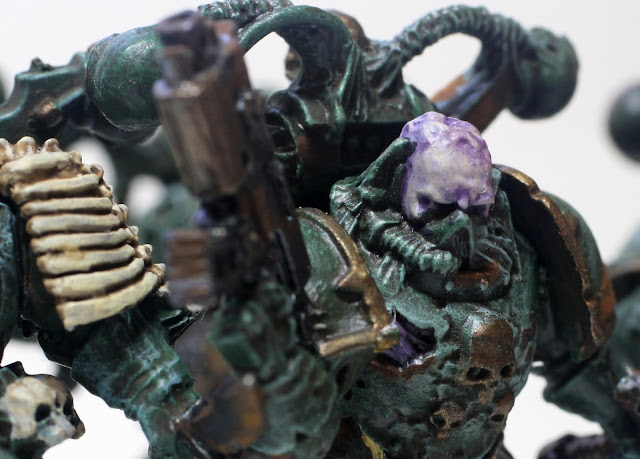 Another painting challenge from Ann — titled “Paint the Crap You Already Own!” — means another chance to dig out some unpainted minis and get them done. So here's a squad of Plague Marines.

I bought them from a seller on Amazon in February 2019. Released in 2002, they were the last Plague Marines made in metal, and this look apparently lasted till 2017(!) when Games Workshop produced the plastic ones currently in use. They're pretty small compared to modern Marines. Despite that there's still plenty of detail on them — cracked armour, gooey bits, horns — and none of the bells, books and tentacles you see on their modern counterparts.

The original box has long gone; they were in a ziploc bag containing seven pairs of arms, seven one-piece head/torso/legs, and seven backpacks. I had endless fun working out which arms went with which bodies and had to resort to the google for help. The only obvious one is the squad leader, who for some reason has a fancier metal backpack. 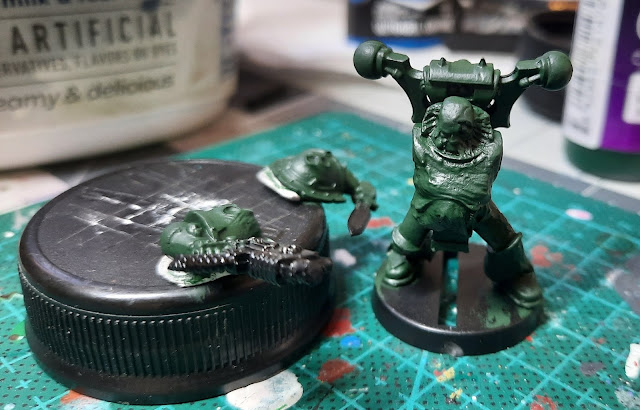 Like my Death Guard Traitor Terminator, I wanted to paint these in a different way to the "official" GW scheme. I kicked off with Heavy Black Green over black primer and a heavy wash with Burnt Umber to give them a dirty patina. I toyed with doing their backpacks in black, but went with the same colour to save work time. 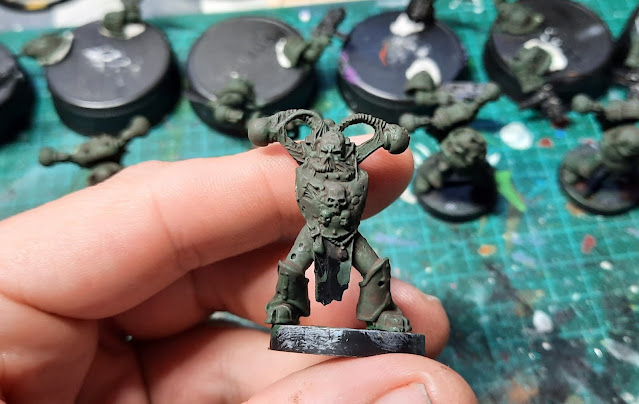 Here's the leader showing off that dirty patina. After drybrushes with Mutation Green and a mix of Grey Green and Army Painter Scaly Hide they got a final gentle highlight with Light Sea Blue, which would be in the next photo if I'd remembered to take it.

Talking of photos, I tried to get a group shot but couldn't get them all in frame, so the finished chaps are dotted through this post. 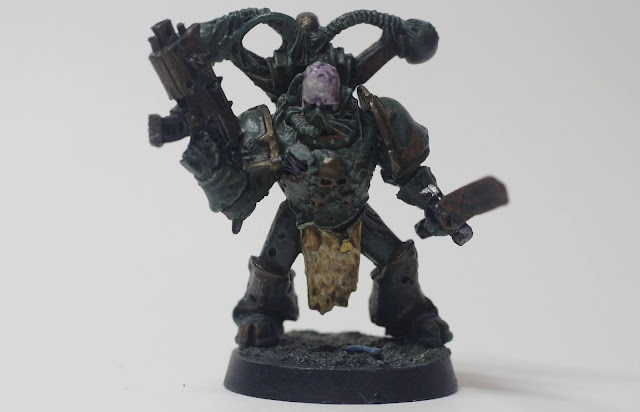 With the green done it was time for the trim on their armour. Like the Terminator, I used Tinny Tin as it's a darker metallic that looks like dirty bronze. It also covers really well so there was no need for a base coat over the trim. After a lot of careful brushing with my fave 4/0 brush, all the leg and arm trim was done with only a few errant bits making it onto the armour plates.

I also used it to paint the skulls on the leader's chest and backpack and to add a second colour to bits of the squad's backpacks. I gave all the Tinny Tin a once-over with Sepia Wash to give it a reddish colour. At this point they all got a coat of matte varnish. 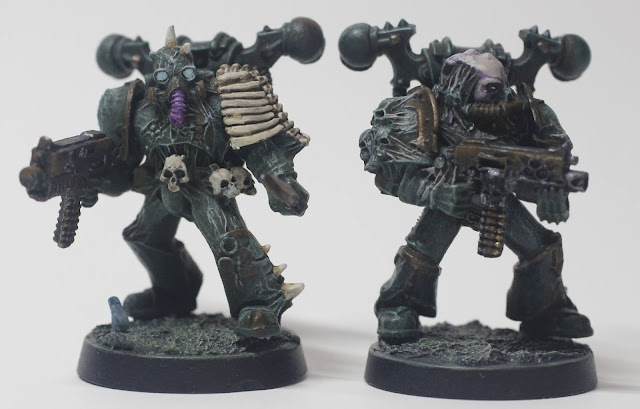 Now we're onto the flesh tones. This is the bit I was really worried about as flesh is one of those things I can bugger up really easily. With these guys being proud members of the XIV Legion, not to mention being riddled with every blight Nurgle Himself can conjure up, I went for Vallejo Pale Flesh to give them a nice unhealthy look. A wash with Purple Tone and some more Pale Flesh and they looked better than I hoped. I also painted the stringy stuff coming off their heads and growing on their armour Pale Flesh as if their body tissue is merging with the armour, inspired by these lines from The Lords of Silence:

His old plate should be heavy. It is crusted with the patina of age, thickened and fleshed, scabbed
with boils and laced with glistening strings of pulled marrow.

Some of them have distended bellies or ragged armour, and I decided to use the skin tones on those bits. I kind of like the idea that the Marines are so gross and bloated by pestilence that they're hanging out of their rotten armour but are still somehow damn near indestructible.

And now, the rust. I didn't want to use as much as I'd plastered on my Terminator so I used it sparingly, just to add a bit more visual interest and age, especially on the backpacks, knives and guns. 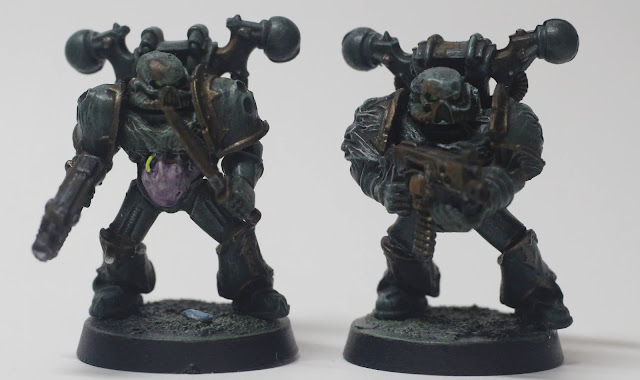 Time for the final details OH GOD THE FINAL DETAILS! Or, as I like to think of it, another chance to bugger something up. The plasma gunner had his weapon's coils painted with Scorpy Green and Green Yellow. The other helmeted Marines had Scorpy Green for their lenses, and the bare-headed ones Off-White for their eyes (at least when they had some). The chap in the WWI gasmask had his eyes painted with Verdigris for a pale blue look and the tube coming out of his helmet done in Purple and Pink as a nod to the new look.

The horns poking through their armour are Reaper Old Bone, Vallejo Bonewhite and Off-White, as is the one Marine's awesome ribcage shoulder pad. The leader's loincloth thing is Ivory with Sepia and Burnt Umber washes daubed on. After all that detailing I only had to do a few touch-ups, so I was happy. 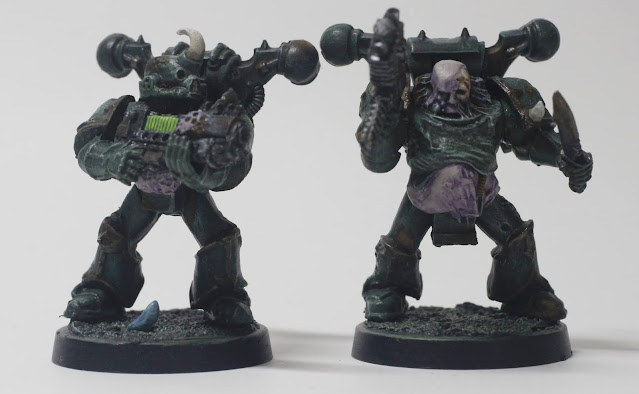 I'm not going to lie: as much as I enjoyed painting these gruesome little buggers I was looking forward to getting them finished. So when it came to their bases, I just went with what I'd already done for their First Company counterpart: Vallejo Black Lava painted with green craft paint, washed with Purple Tones and highlighted with Goblin Green and Light Sea Blue.

I thought the bases needed a bit more Nurgle, so I made some maggots/worms out of greenstuff, painted them and glued them on. I made one for each base, but three of them are having the holiday of a lifetime somewhere on the floor of the spare room.

And that was it — after more than two years in a bag in a box, they're painted. This is the first actual unit of Space Marines, rather than just individual figures from different Chapters, that I've painted in almost 30 years. I'm really happy with them.