Argamite Explorer (and another zombie) 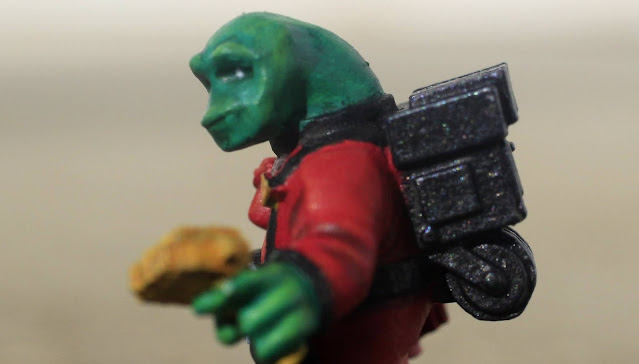 I bought this odd little chap as part of a bigger Reaper order back in February this year. He appealed to me for the usual "doesn't look like anything I've painted so far" reason, and I thought he'd be fun to paint. Despite this mini being sold since 2019, I can't find any painted examples of him on the interwebs, not even on Reaper's forum, and I have no idea what "Argamite" refers to. I've named him Ixlr. 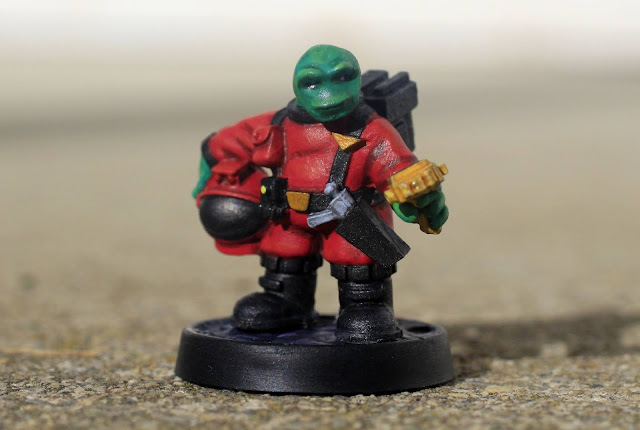 Ixlr was started back in July with a coat of white primer, but then I kind of forgot about him as I got on with other figures. After spending the best part of 2½ months sitting on my desk looking lonely, he was packed into my storage box and moved across the country. I finished him off yesterday.
I thought about doing his spacesuit in yellow, but chickened out and went for red. Why I went for red when it's one of my problem colours I'll never know. After a once-over with Vallejo Red, the shading was done with thinned Burnt Red as I wanted something different from the usual green or purple wash.
I used layers of Flat Red, Vermillion and a final touch of Bright Orange (yes, I took the 'Eavy Metal Blood Angels route for once) to highlight Ixlr's suit.
For his skin tone I wanted something suitably alien, and what says "alien" more than little green men? After two coats of Park Green Flat and a wash of Green Tone, I highlighted him with Scorpy Green and a touch of Green Yellow. A couple of dots of white worked for his eyes. 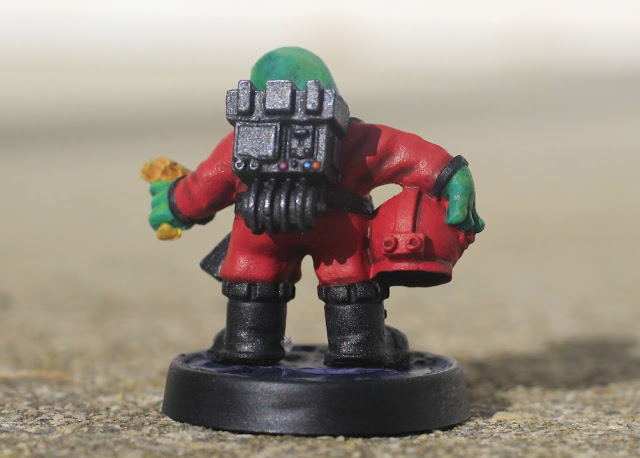 Ixlr's backpack, cuffs, boots, collar, holster and all of his belts are just black with a coat of Plate Metal mixed with Black Wash. This was partly to give it a sort of alien look, and partly sheer laziness. I did his helmet visor the same way. I wanted his pistol to stand out a bit, so it's Ghost Grey.
His little tricorder thingy is yellow just to add another colour. Golden Yellow shaded with Umber Wash and highlighted with Lemon Yellow worked, and I gave it a gentle drybrush with Plate Metal to make it look a bit battered. He's sitting on a fairly basic base I knocked up a few months ago.
In case anyone's thinking, "Hey, Ixlr looks like a redshirt from Star Trek," you're right but that wasn't my intention. I only noticed that once his little triangle badge thing was painted gold, and at that point I wasn't going to start again.
Ixlr is part of Reaper's Chronoscope series, a range of figures that covers everything from Wild West to scifi to horror and much more. It's one of the reasons I like Reaper so much: if you need a specific mini, chances are they have it. 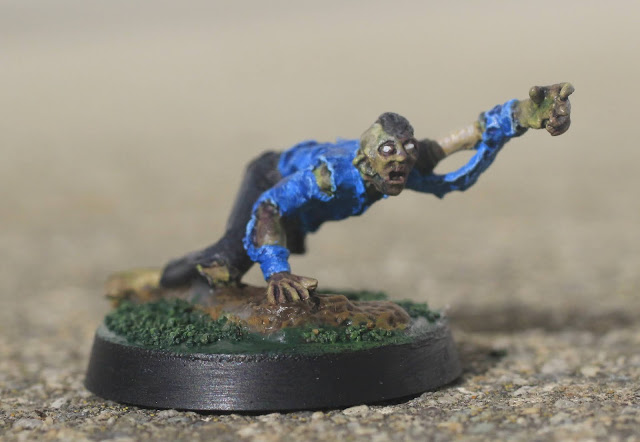 This is the other zombie that came with Sarge. He was churned out at the same time I painted Ixlr. He's a pretty quick paintjob as he's one of the crappier looking zombies I own. He did have a lower left leg but it was bent out of shape so I cut it off.
I just slapped on some Flat Blue and Blue Tone for his shirt and hightlighted it with Deep Sky Blue. His trousers are Dark Grey washed with Black Wash, and the skin is the usual combination of Dead Flesh with Green and Purple tones. The bones are Citadel's Wraithbone.
I glued his integral base (AAARRGGHHH!) to a 25mm base and painted it Chocolate Brown. After shading with Umber Wash it was highlighted with Flat Earth. The plastic base got a coat of tacky glue and some sand, and was painted with Black Green and Olive Green. Voila, another zombie.
Labels: alien, reaper, vallejo, zombie