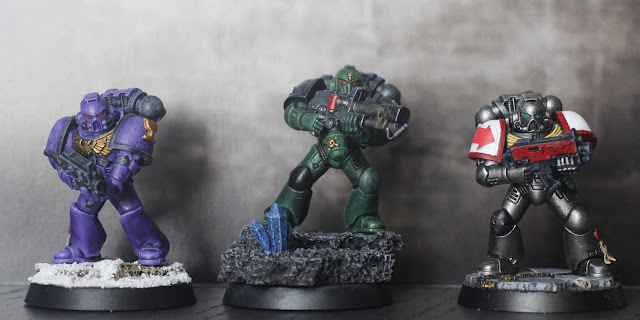 Here we go again, this time with a Soul Drinker, a Salamander and an Iron Snake. 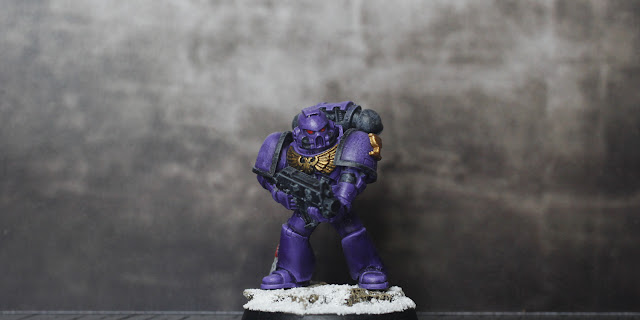 The Soul Drinkers wear fetching purple armour and are the stars of Ben Counter's five-novel series which I read a couple of years ago (I have to admit, it was a bit of a slog). They are were an odd chapter; instead of fighting for the Imperium or for Chaos, they fight for what they see as the ideals of the Emperor. They're also pretty stupid and are tricked by Tzeentch into serving him in return for all kinds of mutations which they think are blessings from the Emperor. Their chapter master ends up with spider legs of all things (Ron at the now sadly-defunct From the Warp blog did an amazing mod of him) and somehow doesn't see himself as a mutant. 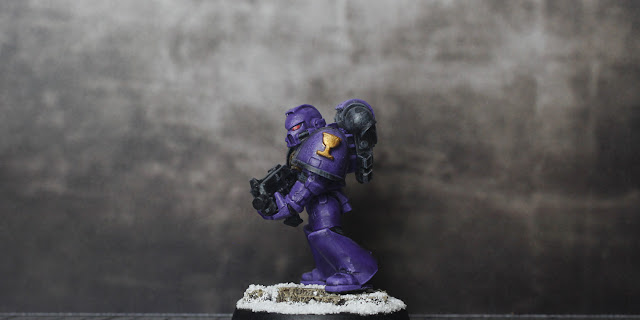 Needless to say, the rest of the Imperium doesn't see things in the same way and the Soul Drinkers are cast out as heretics. The Chapter is reduced to three after finding out they were pawns in a millennia-old plot and being almost wiped out by their parent chapter the Imperial Fists. The surviving Marines walk through a portal into the Warp. Ben Counter resurrected the Soul Drinkers in his novella Traitor By Deed, only this time they're the newfangled Primaris Marines. I might pick it up to see how they get on. 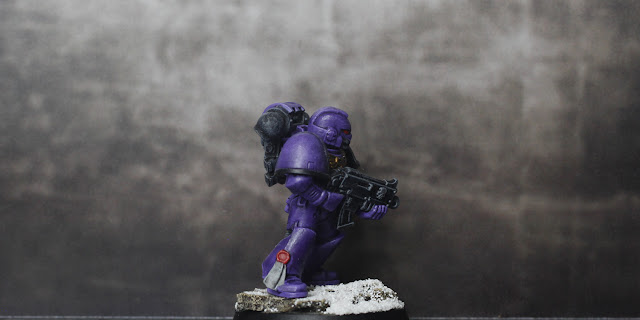 This Soul Drinker was painted with Army Painter Alien Purple, with a 3D shoulder icon from Shapeways. I used a small amount of cork on his base, then decided to plaster it with snow flock to give a better contrast for his armour. 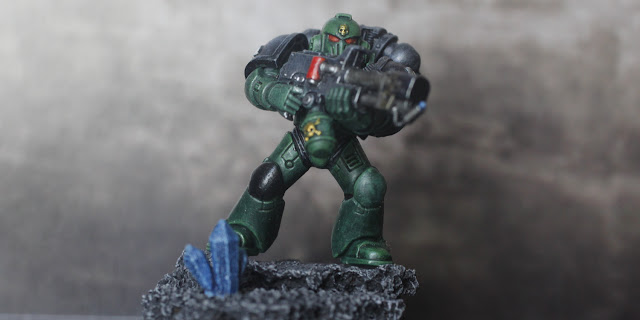 The Salamanders were one of the original "premier league" of Space Marine Chapters along with the Blood Angels, Space Wolves and Ultramarines. They didn't always wear green armour; the original artists took things literally and painted them to look like actual salamander lizards. This was not only silly, it was a pain in the arse to paint so the Sallies were soon given a dark green look, which was then stolen by the Dark Angels, who then replaced the Salamanders in Games Workshop's affections.* 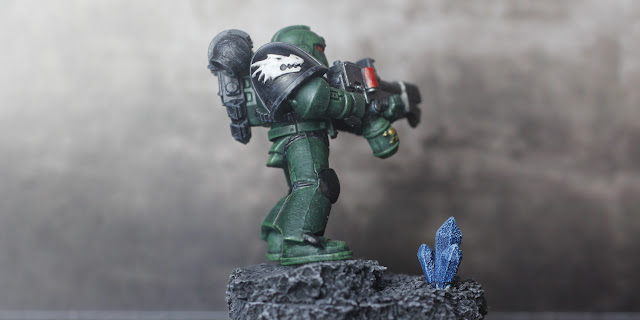 These days the Salamanders wear a much brighter green which I can't stand, so I used Vallejo Black Green to do an old-school look. I found an embossed Sally shoulder pad on eBay, which was the inspiration do this mini. 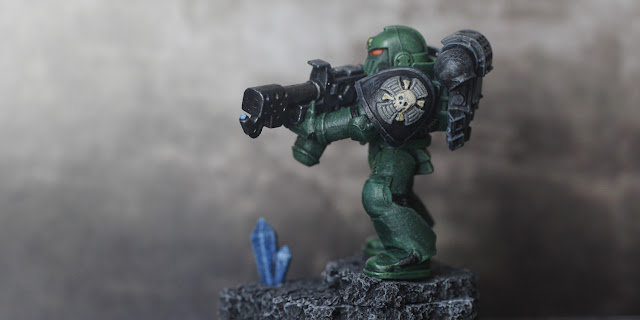 As I'd shelled out on some shoulder pads bearing the Crux Terminatus, I thought I'd give him one to show he's a veteran and is entitled to wear Terminator armour. Salamanders hail from the volcanic world of Nocturne and are huge fans of flamethrowers, so this guy got a heavy flamer. He's wearing a mix of Mk.IV and Mk.VII armour. 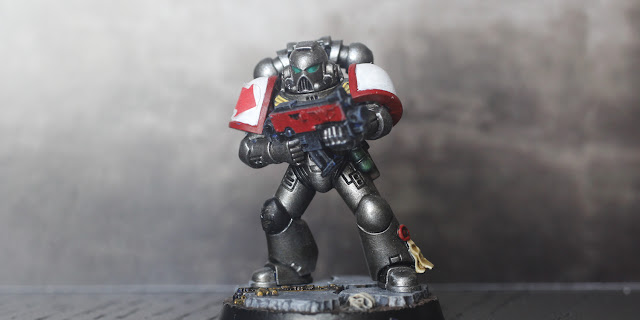 I'm not sure if the Iron Snakes were an existing Chapter or if Dan Abnett created them for his book, but either way they're cool. I can totally recommend Brothers of the Snake as it's fantastic and the first story alone is worth the money; an isolated and fairly backward Imperial world is invaded by Dark Eldar and sends for help, even though they believe the Iron Snakes to be a legend. 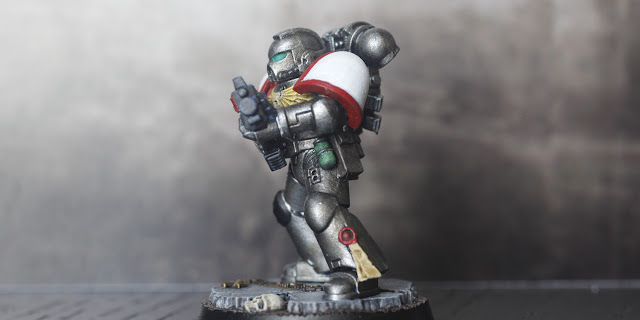 He was fairly easy to paint: Army Painter Gunmetal all over, with White and Dragon Red for the trim. I don't have any Iron Snakes emblems or transfers and there's no way I'm going to attempt to paint it, so like a coward I left his shoulder pad blank. 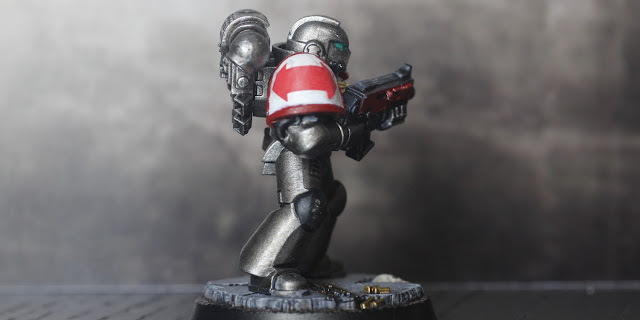 I did have some Dark Angels transfers so I took a tactical squad emblem and put it on his other shoulder pad. Like some of my other Marines, this one is from the Space Marine Heroes range and comes with a moulded plastic base, so thankfully he's not standing on three inches of cork like so many others I've done.

*I have read on a blog, and I cannot remember which one, that the Dark Angel's change from black to green armour was thanks to an error by a freelance artist who did the art for a Space Marine boxed game. He was supposed to paint Salamanders, so he did the Marines in dark green armour, but for some reason was sent the iconography for the Dark Angels. Games Workshop realised they didn't have time to redo the art to meet the game's release date, leaving thousands of players (including myself and some friends) wondering why the Dark Angels on the box were wearing green.
Labels: 40k, army painter, basing, citadel, scifi, snow, space marines, vallejo